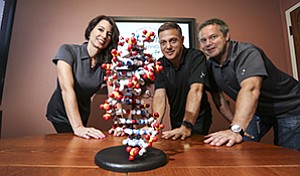 Data Storage Solution May Be in the DNA

San Diego — A local startup is developing technology that could one day replace your laptop’s hard drive with strands of DNA.

The company, called Dodo OmniData Inc., hopes to address the looming lack of data storage space that’s becoming an expensive problem for tech giants like Facebook and Google. These companies are giants of the digital universe, but anyone who uses the internet depends on data storage. And the world is running out of data storage space.

The digital universe is made up of things like images and videos on cellphones uploaded to YouTube, health records stored in hospital cloud systems, banking data accessed from ATMs, and phone calls zipping through digital lines. And the size of the digital universe is doubling every two years, according to a recent study by the International Data Corp.

Thanks in part to the rise of cloud computing (think software-as-a-service and the internet-of-things), digital information is accumulating in data centers faster than companies can build storage space. How much faster? It’s predicted that by 2020, we’ll need about 7.5 more zettabytes of storage than data storage companies will be able to build. To put that in perspective, a standard iPhone comes with about 32 gigabytes of memory. To get 7.5 zettabytes, you would need more than 260 billion iPhones.

“We’re generating data much faster than we can store it,” said Jim Linton, co-founder and CEO of Dodo. “The hard drive factories are at full tilt. And they can’t build new factories fast enough. There’s a huge need to change the way we store data for the long-term.”

When there’s not enough space to store information, data gets deleted.

“And that’s fine, as long as what gets deleted is just a selfie of my daughter,” Linton said. But stockpiles of information — like patient data from experiments with medicines and vaccines — could also be lost. If this data was stored safely, it could be mined for insights as science and technology progresses.

“You don’t know what’s useful and not useful until you go back in time and analyze it,” Linton said. “If I want to save this data for 30 years until we get “Star-Trek-sophisticated,” then we’ve got a problem.”

There’s also a need for governments, militaries, corporations, and other researchers to archive data for long periods of time. Linton can imagine a time, for example, when deep space exploration would require massive amounts of data to be stored in a small space to be brought back to Earth. You can’t have hard drives crashing on 200-year-long missions, so that data would need to be stored in something with more longevity than a magnetic disk.

So Linton and his small team at Dodo OmniData are developing a technology that could replace the status quo for long-term data storage. Today, the standard is a magnetic tape developed in the 1990s. Dodo is aiming to replace that tape with DNA.

With new developments in the field of synthetic DNA (in which scientists piece together strands of DNA in labs), it is possible to encode DNA with 0’s and 1’s, the language of computers. With this technology, text documents, pictures, movies, and other information can be written into the strands of DNA.

The concept of storing digital data inside strands of DNA is not a novel one. The technology was pioneered at Harvard University, where geneticist George Church and his team of post-docs successfully stored an e-book inside DNA back in 2012. A few other researchers have built on his research since, but the technology is still not commercially viable. Dodo is hoping to change that, and they have one of the biggest names in DNA on their side: Jay Flatley, who just came on as a personal investor for the startup.

Flatley is the founder and executive chairman of San Diego’s DNA sequencing giant Illumina Inc. (the largest maker of DNA sequencing machines in the world). He recently joined the company’s board of directors after contributing to Dodo’s Series A round, which closed in August.

“DNA represents the ultimate data storage media, honed by Mother Nature over hundreds of thousands of years,” Flatley said in an email. “Dodo’s technology is designed to harness the density and durability advantages of DNA in a semiconductor system that has the potential to drive down costs, massively increase data storage densities and provide an incredibly powerful long-term storage solution.”

How Does It Work?

Dodo is essentially creating a computer chip that has tiny strands of DNA trapped inside chambers. The chip technology can build strands of synthetic DNA on command, stacking nucleotide bases (A, G, C, T) in a desired pattern to reflect binary code. For example, all A’s and T’s could be assigned the value of “0” and all G’s and C’s could be “1.” Then the strands would only need to be sequenced and decoded in order to unlock the data stored inside. And a lot of data can fit inside DNA.

When Flatley said this technology could increase data storage density, he means Dodo’s computer chip could significantly reduce the footprint of traditional data storage. To put this in perspective, a standard 1 terabyte hard drive (which come loaded in many computers today) is generally 2.5 to 3.5 inches in diameter. In contrast, DNA data storage could fit 10,000 terabytes into the size of a sugar cube.

DNA also has the competitive advantage of being sturdy, and far less likely to “crash.” After all, we’re still accessing data stored in the DNA of pterodactyls from several millennia ago.

It should be stated that while the technology could one day end up on a personal computer, Linton said the first goal is to create archival storage or what he calls “cold storage.” The best applications, at least in the early days, would be to store information that doesn’t need to be accessed on the fly, as it will take some time to extract information from the DNA.

Before Flatley joined Dodo’s Series A round, Dodo had already found a lead investor at Tech Coast Angels in Jeff Friedman. Friedman is a biologist by training and an active early-stage investor in the biomedical space in San Diego. For example, he was an early investor in Cypher Genomics, the company that got snapped up by Human Longevity in 2015.

Friedman said the exciting thing about Dodo is that it’s a high risk, high reward investment.

“If they’re successful, we would expect this to be a high double-digit multiple return on our investment,” Friedman said. “It’s a relatively high-risk component of what should be a diversified portfolio. This company will either be worth nothing or 50 to 100 times what we paid for it at the time of our initial investment.”

Friedman said the fact that Flatley joined the round made him feel pretty good about the investment.

“His coming on board makes us look smart for having gotten in on the deal earlier,” Friedman said, laughing.

Friedman said he expects to know if Dodo was a good or bad investment in about five years.

“We would hope that Dodo can go from an early prototype to an advanced model that could be picked up by a manufacturer and made into a machine that can be commercialized within three to five years,” Friedman said.

The most likely result, Friedman said, is that Dodo will be acquired. Companies that might be well-suited to acquire this technology would include Qualcomm Inc., Intel Corp., Microsoft Corp., Facebook, and Google, Linton said.